On the Shores of the Hudson River - Croton Point Park
A natural park on a river peninsula with sandy beaches and sweeping views of the Hudson located in the Village of Croton-on-Hudson, Westchester County, New York

The Great Hudson River Revival, Clearwater’s annual music and environmental festival, brings people together from around the country to honor the river through songs, education and action.

This year the Revival will help mark three auspicious occasions: 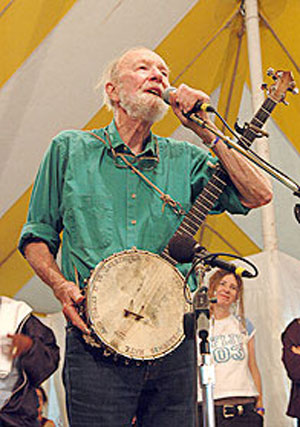 
Inspired by Pete Seeger’s desire to clean up the river over forty years ago, the Revival initially helped raise the funds to build the sloop Clearwater, which has since become a world-renowned floating classroom and a symbol of effective grassroots action. Today, Hudson River Sloop Clearwater is a non-profit organization that sails at the forefront of the nation’s environmental challenges. The revenue raised by the Revival goes to support Clearwater’s numerous educational programs and its work toward environmental and social justice—as well as keeping the Clearwater afloat!

Clearwater’s Great Hudson River Revival is a two-day music and environmental festival that takes place each June. It is America’s oldest and largest annual festival of its kind, a unique, one-of-a-kind event that has hosted upwards of 15,000 people, growing each year since it began nearly 40 years ago. As always, all proceeds benefit Clearwater, a nonprofit 501(c)3 environmental organization based in Poughkeepsie, NY.

Join us on the beautiful shore of the Hudson River! Croton Point Park, in the Village of Croton-on-Hudson, is Westchester County’s beautifully situated on a spectacular river peninsula with grassy meadows, a tree-lined shore and sweeping views of the river.

The Festival—a celebration for the Hudson River—features high quality singer-songwriters, performers and musicians offering fun with a purpose—a diverse mix of contemporary, traditional and American Roots music, dance and storytelling.

Stylistically, the musical artists performing at the festival cover a wide spectrum—from Blues to Rock, Reggae to Salsa, Bluegrass to Jazz, and Funk to Folk. Dance all weekend on a tented raised dance floor to Zydeco, Swing, Cajun, Square Dancing music and more.

The Clearwater Festival is designed and implemented to create an enjoyable, entertaining family experience in alignment with Clearwater’s environmental, social and business sustainability standards. The Festival is organized with the utmost attention to each program element. A diverse lineup of musicians, speakers, vendors, environmental exhibits, displays and grassroots activist booths are presented to educate, advocate and celebrate a sustainable lifestyle. In addition to the festival programming content, all behind-the-scenes elements, such as sustainable stage power, recycling of food waste, volunteer meal preparation and sponsor selection are all done with goals of sustainability and social responsibility in mind. 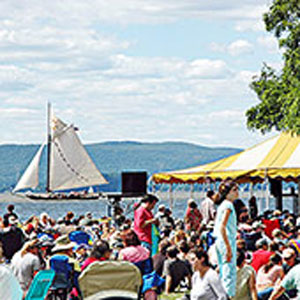 Mission of the Festival

The Great Hudson River Revival is produced by the nonprofit, member-supported, environmental organization Hudson River Sloop Clearwater, Inc. to raise funds and awareness aimed at protecting the river and the earth. All proceeds go directly to support Clearwater’s environmental research, education and advocacy efforts to help preserve and protect the Hudson River and its tributaries, as well as communities in the river valley.

The Festival makes possible innovative educational initiatives, which have helped more than 430,000 young people and over 250,000 adults experience the wonders of the Hudson River from aboard the sloop Clearwater.  The organization itself has gained worldwide recognition for its leadership in helping to pass landmark environmental laws, both state and federal, including the Clean Water Act. Recently, Clearwater played a key role in the Environmental Protection Agency’s (EPAs) decision to compel one of the Hudson River’s biggest polluters to begin removing toxic PCBs from the water and restoring one of the most polluted portions of the river.

In 2002, Pete Seeger, the founder of Clearwater, was named a “Clean Water Hero” for his prominent efforts in the passage of the Clean Water Act. His tireless devotion to working through Clearwater and promoting its message to effectively use the law in prosecuting polluters of America’s waterways has made the Clean Water Act perhaps the most successful environmental law in the country.

Today, seeing the success of the Clearwater organization, one cannot imagine these achievements being possible without the Clearwater Festival. The Great Hudson River Revival has helped raise funds and served as a beacon toward raising awareness in support of America’s First River. And it all started more than 35 years ago, when it was but the dream of a banjo-picking folksinger.

History of the Festival

Back in the mid-sixties, after centuries of accumulated sewage pollution and industrial dumping of toxic chemicals, the Hudson River, like many of America’s most important estuaries, was declared “dead”. The river’s fragile ecological system was devastated. Not a single fish was found in many areas, and the level of commercial fishing had dropped so dramatically as to be regarded as nonexistent. Recognizing this incredible social and environmental tragedy, Pete Seeger, a popular musician and respected activist, decided “to build a boat to save the river”. Holding small, fundraising river concerts throughout the Hudson River Valley, he literally passed his banjo among the crowd, collecting contributions to build the elegant tall ship that would become a symbol of environmental advocacy, the flagship of the American Environmental Movement, the sloop Clearwater. 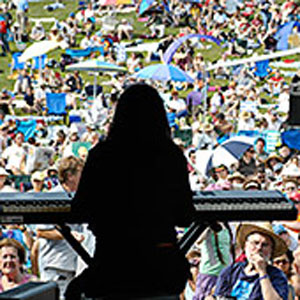 Since the 1960s, the Clearwater Festival has grown into the country’s largest annual environmental celebration, its music, dance and storytelling, education and activism attracting thousands of people of all ages to the shores of the Hudson River.