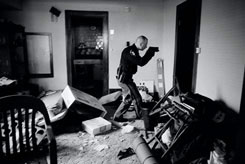 The picture shows an armed officer of the Cuyahoga County Sheriff's Department moving through a home in Cleveland, Ohio, following eviction as a result of mortgage foreclosure. Officers have to ensure that the house is clear of weapons, and that the residents have moved out. The winning photograph, taken in March 2008, is part of a story commissioned by Time magazine. The story as a whole won Second Prize in the Daily Life category of the contest.

Jury chair MaryAnne Golon said: "The strength of the picture is in its opposites. It's a double entendre. It looks like a classic conflict photograph, but it is simply the eviction of people from a house following foreclosure. Now war in its classic sense is coming into people's houses because they can't pay their mortgages.

Fellow juror Akinbode Akinbiyi commented: "It is a very ambiguous image. You have to go into it to find out what it is. Then all over the world people will be thinking ‘this is what is happening to all of us'."

Juror Ayperi Ecer said: "We have something here which visually is both clear and complex...It's not about issues - 2008 is the year of the end of a dominant economic system. We need a new language, to learn how to illustrate our lives."

A total of 96'268 photographs were submitted to be judged, representing an increase of 19.5% since last year. The number of participants was also a record, a total of 5'508 photographers sent in their work, which is a rise of 9.7% compared to 2008.